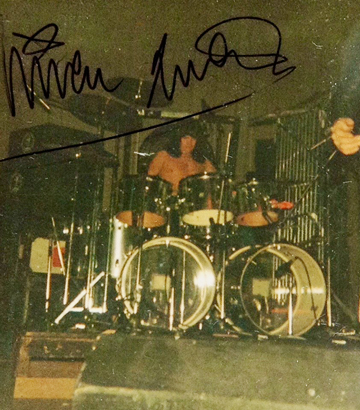 EVENTS
1970: The Who’s gig at Leeds University was recorded & later released as their ‘Live at Leeds’ album.
1973: David Bowie collapsed on stage during a concert at Radio City Music Hall in New York City.
1986: Frank Zappa appeared as a crime boss on an episode of the television series ‘Miami Vice’.
1989: Death of singer / songwriter, Vincent Crane of Atomic Rooster [aged 45].
1990: The Rolling Stones played their first concert in Japan, at the Korakuen Dome, Tokyo ~ 28 years after forming.
1993: Sonic Youth played a concert at Auckland Town Hall ~ I was there!
2002: Death of drummer, Mick Tucker of Sweet [aged 52].

Mighty Mick Tucker ~ the most underrated drummer ever! I witnessed him live a few times and he was phenomenal on his double bass Ludwig kit, back in the days of the original SWEET. I took this shot of him at Regent Theatre, Dunedin in 1975. It was my first concert experience and SWEET blew me away with their powerful heavy rock performance. I still have his drum stick from that gig! It has deep gashes at the thick end, as Mick held his sticks back to front and hit his cymbals so hard! Mick signed all my photos in 1986, when a later version of Sweet visited NZ.

This video is the track “The Man With The Golden Arm”, from Sweet’s ‘Desolation Boulevard’ album (original edition), featuring Mick’s fantastic drum solo. Sadly, he succumbed to leukaemia 18 years ago today. Rest in Peace, Mick… Gone, but never forgotten.

No trackback or pingback available for this article.