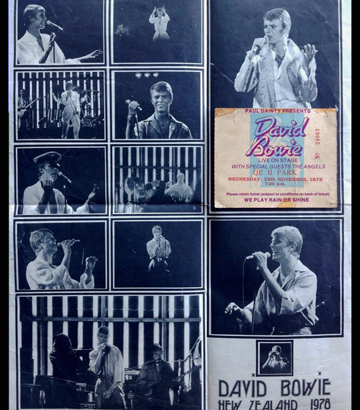 I will never forget the David Bowie show in Christchurch, on 29 November, 1978 (my first outdoor concert). A schoolboy at the time, my friend Pump and I caught the bus up from Dunedin and stayed at his Aunty’s place that night.

Opening with the eerily atmospheric “Warszawa”, it looked at first as if Bowie was conducting the band, but he was actually hidden in the shadows, playing clavinet. Then “Heroes” kicked in and from here on we were treated to one of the finest two hour musical performances I have ever witnessed. The stark lines of white fluorescent lighting was incredibly effective and David owned the stage with his charismatic presence and rich, earthy voice. Most of the songs from ‘Ziggy Stardust’ album got played, as of course were many tracks from his latest two albums, ‘Low’ & ‘Heroes’ — all excellent indeed! The song that most impressed me though was “Station to Station”, opening the second part of the concert with wailing guitars and train noises (created on keyboards) shaking the ground. Another of the many highlights was “Jean Genie”, and “Suffragette City”, with Bowie kicking high in the air at crescendo. The encore of “TVC15”, “Stay” and “Rebel Rebel” completed a magnificent concert!