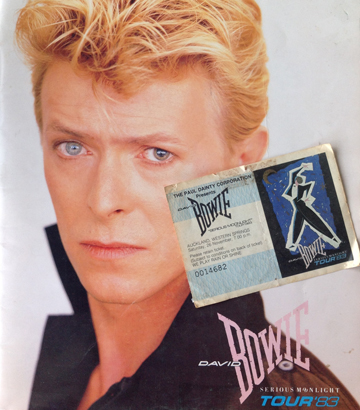 EVENTS
1968: Cream played their farewell concert at the Royal Albert Hall, with Yes & Taste as support.
1976: Kevin Godley & Lol Creme left 10cc to work as a duo.
1983: David Bowie performed his ‘Serious Moonlight’ concert at Western Springs Stadium, Auckland — I was there! (Ticket & program shown here)
1990: Public Enemy played a concert at Logan Campbell Centre, Auckland ~ I was there!
1995: Alice In Chains were at No.1 on the US album chart with their self-titled album.
2011: Death of Keef Hartley, of John Mayall Band, Keef Hartley Band & Dog Soldier [aged 67].
Bowie‘s amazing performance at Western Springs on 26 November, 1983 still holds the record for largest audience of paying attendees at a concert in New Zealand. There were over 83,000 ticket-holders in the crowd (including my sister and I). Estimations take the figure to around 90,000, as many more people jumped the perimeter fences to get in. Check out this very interesting mini-doco about the event: