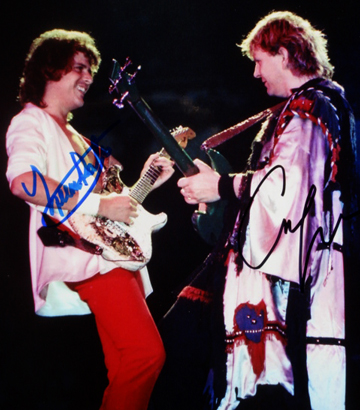 EVENTS
1987: Yes released their ‘Big Generator’ album.
1991: Over 4 million copies of Guns N’ Roses albums, ‘Use Your Illusion I’ & ‘Use Your Illusion II’ were simultaneously released, making it the largest ship-out in American pop history. Both albums went to No.1 & No.2 on the UK & US charts.
1991: Death of singer, Robert Derminer a.k.a. Rob Tyner of MC5 [aged 46].

Was it really 32 years ago since the ‘Big Generator’ album was released? Yes! There is no official video for my favourite track from the 1987 LP (“Shoot High, Aim Low”), but a Yesfan has put this nice collage together for it…

After the ‘Big Generator’ tour, original singer, Jon Anderson quit the group to reform with classic Yes men, Bill Bruford, Steve Howe & Rick Wakeman. Guitarist, Trevor Rabin and bassist, Chris Squire (pictured above) continued to work together under the Yes banner for several more years. At that point in time (1988-1990), there were two versions of Yes, and now in 2017 history has repeated itself! Steve Howe & Alan White have “Official” Yes (with Geoff Downes, Jon Davison & Billy Sherwood), which they have kept going through the decades, and with the passing of Chris Squire, three ex-members ~ Jon Anderson, Trevor Rabin & Rick Wakeman ~ have had their version of Yes playing shows too. Opinions are divided about the two groups, but I reckon two Yes’s is even better than having one Yes! 😀