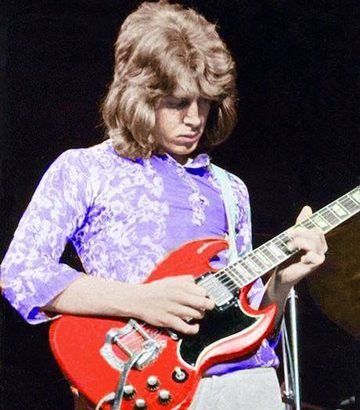 EVENTS
1970: The Doors played the first of several shows at the Felt Forum in New York City. The shows were recorded for use on their “Absolutely Live” album.
1996: Pink Floyd was officially inducted into the Rock ‘n’ Roll Hall of Fame.
2016: Death of trumpeter, Mic Gillette of Tower of Power [aged 64].
2016: Death of drummer, Dale “Buffin” Griffin of Mott The Hoople [aged 67].

Happy 71st Birthday to Mick Taylor ~ the best guitarist The Rolling Stones ever had! The five short years that Mick was in the band (1969 – 1974) produced the greatest Stones albums… ‘Let It Bleed‘, ‘Sticky Fingers‘ and ‘Exile On Main St.‘. (Also their most essential live album, ‘Get Yer Ya-Yas Out’). Taylor wasn’t credited for most of the songs he contributed to, so missed out on the big royalties that Mick & Keef rake in. I have seen The Stones three times over the years, and easily the best concert was when they last toured, in 2014. The 20 minutes while Mick Taylor was guest guitarist (“Midnight Rambler” & “Satisfaction”) were absolute magic!

Also, Happy Birthday to Jeff Berlin, bass player ~ heard of him? He’s performed with Frank Zappa, Bruford, ABWH, Scott Henderson, Frank Gambale, Eddie Van Halen and many more great musicians. Carlos Santana called Berlin “The best bass player in the world”, and Geddy Lee of Rush claimed Jeff as, “the greatest bass player on the planet”. Recommended viewing is the ‘Evening of Yes Music Plus…’ by Anderson Bruford Wakeman Howe, where he stood in for Tony Levin who was ill. Jeff had to learn the entire set at the last minute and impressively played the cuts from the ABWH album, along with complicated Yes pieces that originally featured Chris Squire.