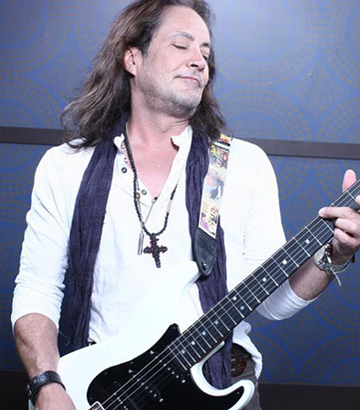 EVENTS
1964: The Beatles scored their first US No.1 album with ‘Meet The Beatles!’
1968: John Lennon & George Harrison arrived in India to study meditation with the Maharishi.
1975: Rush released their second album, ‘Fly By Night’, which was their first record to feature drummer / lyricist, Neil Peart.
1977: Glen Matlock was fired as bass player from The Sex Pistols, to be replaced by Sid Vicious.
1981: Death of guitarist, Mike Bloomfield [aged 37].
1997: Cathy and I had dinner with Steve Vai, Mike Keneally, Philip Bynoe and Mike Mangini at a restaurant in Ponsonby, Auckland. The band (except for Steve) were having drinking races with bottles of red wine. They recovered the next day, in time to perform a fantastic concert at The Powerstation.
2016: Death of Denise Matthews a.k.a. Vanity of Vanity 6 & Prince’s band [aged 57].
2020: Elton John played a concert at The Mission winery ~ I was there!

Guitarist, Jake E. Lee is 63 today! After admirably taking on the difficult task of replacing Randy Rhoads in Ozzy’s band in 1983, Jake went on to form Badlands in ’88. They put out some excellent heavy rock music, but split after only two albums. Jake kept a relatively low profile during the ’90s, but re-emerged in 2014 with his great new band, Red Dragon Cartel. Originally from the self titled Badlands debut LP, this is a scorching live rendition of “High Wire”.