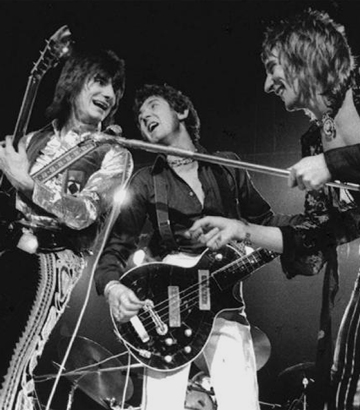 EVENTS
1966: The Jimi Hendrix Experience formed, in London.
1975: Rod Stewart & Faces made their final live appearance, at Nassau Coliseum, Long Island.
1985: Death of Ricky Wilson of The B-52’s [aged 32].
1994: Two reunited Led Zeppelin members released their album, ‘No Quarter: Jimmy Page & Robert Plant Unledded’.
1996: The movie, ‘The Rolling Stones Rock and Roll Circus’ was finally released, 28 years after it had been filmed in December 1968.
2016: Rod Stewart was knighted, for services to music and charity.

Awise Sir Woderwick! Rod Stewart was knighted a year ago today in London, by Prince William. Now 74, Sir Rod has had huge success in the world of pop with his distinctive voice and made some glorious rock ‘n’ roll with the Faces! It was 43 years ago that Faces played their last gig with Rod.